Skip to main content
Get Better. Do Better. Be Better.
Join Our Team

Street Outreach Workers (SOW) will respond to street violence under the operations of the San Francisco Street Violence Intervention Program, a street outreach and crisis response initiative created to reduce and intervene in youth related street violence for the City and County of San Francisco. San Francisco street violence refers to any severe conflict perpetuated by rival territories which may be initiated by turfs or other street associations’ rivalry. SOWs will be part of a geographic team responsible for street outreach and crisis intervention in one of the following neighborhoods: Western Addition/ South of Market & Tenderloin, Mission, Bayview-Hunter’s Point/Potereo Hill and Visitation Valley. This position has a specific emphasis on the Mission District of San Francisco. This job can be dangerous at times and it requires that one be mindful of their safety; not only for themselves but for the safety of their co-workers.

The Street Outreach Worker will be primarily responsible for conducting street outreach, in which they will become more familiar with at-risk youth in the zone they are assigned. They will be shadowing other levels, in order to learn advanced skills, such as group facilitation, mediation, and crisis response.

And, other duties as assigned

Education and Knowledge, Skills and Abilities 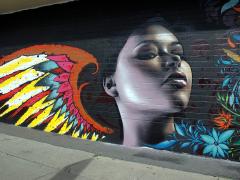