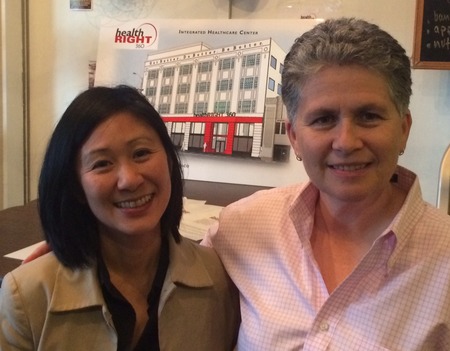 On the evening of Tuesday, October 28, HealthRIGHT 360 hosted a Neighborhood Meeting to present the organization's new integrated healthcare center that will be created at 1553 Mission Street in San Francisco. Grandma's Deli and Café, in the same Mid-Market/Van Ness Corridor neighborhood, provided both the location and the refreshments for the event, which presented an opportunity for neighboring residents and businesses to learn more about the project. HealthRIGHT 360 CEO Dr. Vitka Eisen was joined by the project architects, lead contractor, and project management; guests included Ivy Lee from the office of San Francisco District 6 Supervisor Jane Kim.

This meeting was the first in a series of HealthRIGHT 360 outreach efforts to engage the community during the project's transformation of a five-story building into a modern medical facility.