From the doctor to the DMV: Trans people rush to change IDs under Trump 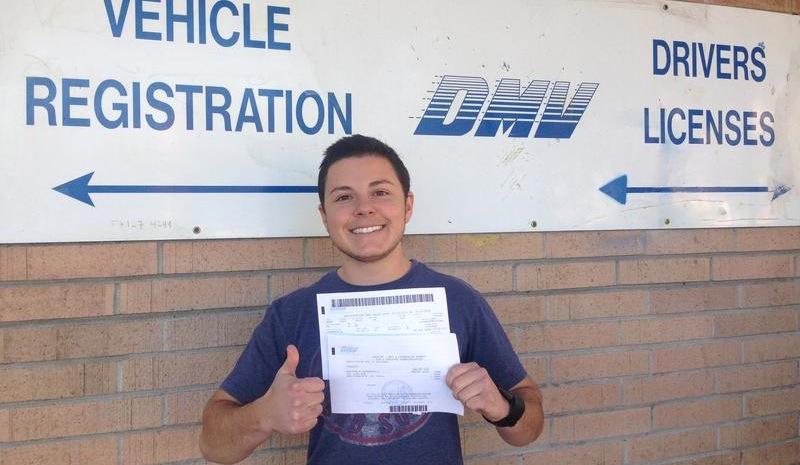 Kris Gambardella rushed to update the "gender marker" on his driver's license after Trump was elected.

Kris Gambardella is visiting the doctor today in order to get a new driver’s license. Kris is 26 and does social work in San Francisco. Like a lot of transgender people, he has yet to legally change his name and what’s called the “gender marker” on his legal documents.

“I am not a fan of paperwork and reading through all the legal jargon,” he says. So he’s been procrastinating.

Also like a lot of trans people, he’s now scrambling to get it done in case the process becomes harder — or even impossible — under President Trump.

“I just feel like I can’t put it off anymore,” he says.

Trump hasn’t specifically said he wants to target the policies that allow trans people to legally change their gender, but he has surrounded himself with people who have a track record of opposing LGBT rights. That has a lot of transgender people worried.

The first step to change what’s called the “gender marker” on documents like driver's licenses and passports is to get a doctor’s note certifying a gender transition. Since the election, the Lyon-Martin health clinic in San Francisco has seen a huge increase in the number of people coming in to get these doctor's letters.

J.M. Jaffe is the trans health manager for Lyon-Martin. In the past, Jaffe helped an average of three to five people a week with this process. “Once Trump was actually elected, that jumped up to about 30 to 40 per week and has been pretty steadily maintaining that rate,” Jaffe says.

The Lyon-Martin clinic decided to host a pop-up event to help the increasing number of people who want to update their documents.

That’s why Kris is here. After filling out a stack of paperwork, he meets with Lyon-Martin’s Medical Director, Dr. Dawn Harbatkin. She reviews Kris’s paperwork and talks over his medical history with him. Basically, her task here is certify that Kris has undergone a gender transition.

Think about it: there are a lot of documents that list your gender — your driver’s license, passport, social security record, and birth certificate. If you have a green card, it’s on there too. Individual states set the policies for how and even if you can change the gender on your birth certificate and driver’s license. The federal government sets the policies for changes to social security records, passports, and immigration documents.

Again, Trump hasn’t said he wants to go after the federal laws that allow people to legally change their gender, but he has consistently advocated for repealing the Affordable Care Act, and that could impact trans people’s health more generally.

In the last six years, there have been federal gains for trans rights. The Obama administration rewrote the policy requiring gender reassignment surgery to legally change gender. Now, all that’s required is what’s called “clinically appropriate gender transition” - letting doctors and patients decide if a person has undergone a gender change.

Since the election, many trans people have become concerned that this policy will get re-written again. Even if it doesn’t, Jaffe says the Trump presidency has people worried about a rise in transphobia in general. You might have heard about so-called “bathroom bills.” States like North Carolina passed laws that require people to use the bathroom of the biological sex that’s listed on their birth certificate. A number of states even sued the Obama administration to protect their right to maintain these policies. Trump joined the debate last week by dropping charges against these states.

This all has many trans people rushing to update their documents. That’s why Lyon-Martin decided to host this pop-up clinic and open its doors to the general public.  “We were really thinking if our patients need this, there have got to be other people who don’t have access to a primary care provider who also need this,” says Jaffe.

According to Jaffe, many transgender people don’t have health insurance, and if they do, they often get inadequate care, even in a seemingly progressive place like the Bay Area. A Stanford study in 2011 found that the average medical student receives only five hours of training in LGBT- specific care.

Legally changing your gender is a time-consuming and expensive process. The court order alone costs upwards of five hundred dollars. Then people have to visit every agency that issues IDs, and pay a processing fee at each one.

Also, not everyone that’s trans wants to legally change their gender, or they may not like the limited options of just male or female. “I’ve had more and more requests from our patients here to have our letters reflect a change to a non-binary identity,” Jaffe says.

The state just allowed the first Californian - and the second person in the entire country - to legally change their gender to a non-binary identity last week. You could ask why we need a gender marker on our IDs at all. Some advocates of this thinking say that a current photo is a much better way to identify someone than an “M” or an “F” on a license.

A few days after the clinic, Kris is practically giddy to run an errand most people hope to avoid: He’s at the DMV.

Equipped with the doctor’s letter from the Lyon-Martin clinic, he’s hoping to change the gender marker on his driver’s license as well as get a new photo.

“That’s what giving me the most problems recently,” he explains. “Like the last week or so, I’ve gotten called out every time I’ve used my license.” People are questioning whether the old photo on Kris’s driver’s license is actually him. “It is me,” he has to tell them. “I promise.”

After this, Kris still has to schedule a court date to legally change his name, and that alone could take months. Then he’ll have to take that court-ordered name change and his doctor’s notes back to the DMV and all the other agencies that issue IDs, to change his gender marker.

At least in a few weeks he’ll be getting an ID in the mail with a photo and gender marker that matches who he is.

Even though the new administration hasn’t proposed any policy changes yet, Kris is motivated. He’s on his way to legalizing his gender just in case.